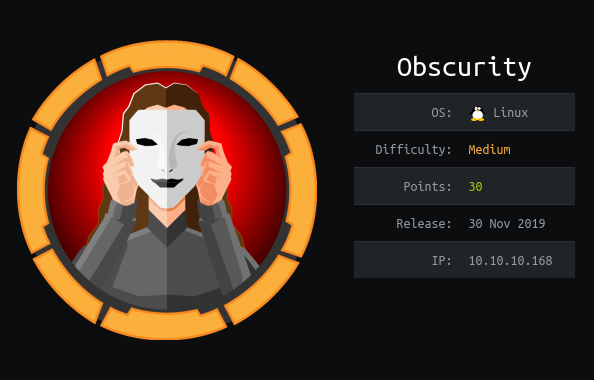 We first start off with a nmap scan of the machine IP Address. Then we convert our finished scan to a html file and view it in the browser.

Here we see there is a Web Server running on port 8080, and a listening SSH Server on port 22.

As always we will add the address to our /etc/hosts file.

Next we check out the web page being served on port 8080 in a browser. There isn’t much there, but it does tell us that the company makes, uses, and distributes custom cryptographic software. We see there is possible username/contact information. There’s also a message to their developers about the web server source code file. It tells the filename, the language it’s written in, and that it is in a secret directory.

We use wfuzz to brute force find this secret directory and locate the server source code, which will be aided by the fact that we know the name of the source code file. We are successful and find the file located at ../develop/SuperSecureServer.py.

Then open and inspect the code, looking for vulnerabilities.

Here we can see that it is a somewhat basic python web server. The biggest security issue that stands out is the use of the python exec() function. We find that it is accepting a string formatted URL path, that can be provided by us. We should be able to escape the string formatting with '; and inject some reverse shell python code that will be executed by the exec() function. We will use a payload that we found on PayloadAllTheThings.

This is the reverse shell payload that we will use, and we url encode it as well, getting it ready to send as a GET Request.

We setup a local netcat listener.

Then setup our GET Request with our payload in Burp Suite, and send the Request.

We check our netcat listener and see that we got a callback and now have shell access as www-data. We now have a foothold in the system.

After browsing around a bit we see some interesting files in the user /home/robert/ directory. Here we see there is a user.txt file that we do not have permissions to read, as well as a python script called SuperSecureCrypt.py, and data files passwordreminder.txt, check.txt, and out.txt, as well as a directory named BetterSSH which we will investigate later.

We cat the files to see what they contain.

Now we look at the source code for SuperSecureCrypt.py and try to see what and how these files are used or generated.

Looking at all this, it appears that the contents of check.txt was encrypted with a secret key, and it’s output is in out.txt. After inspecting the algorithm used to encrypt, it looks like we should be able to reverse the encryption by simply using the -d switch and feeding the output (out.txt) as the input, and use the un-encrypted check.txt text as our key. This should output the original key used to encrypt check.txt, but repeating to match the character length of the original message.

With passwordreminder.txt being an encrypted file as well, we see if the user used the same key, alexandrovich, to encrypt it.

Running sudo -l under this account shows us we have privileges to run /usr/bin/python3 /home/robert/BetterSSH/BetterSSH.py as sudo with no password.

We go back into that directory and look at the source code for this python program.

It looks like this program will ask you for your user credentials and validate them with sudo privileges from the /etc/shadow file. Once authorized you can take advantage of the hard coded sudo command it has by simply sending -u root, then your command, which will be appended to sudo in the highlighted lines above. With full root privileges now we can easily read the /root/root.txt file.

With the ability to run any command with sudo privileges we could now create our own account or set up SSH for the root account and have full access to the machine indefinitely.